skip to main | skip to sidebar

Does "Everything Happen for a Reason," or Do We Just Make Some Killer Lemonade? 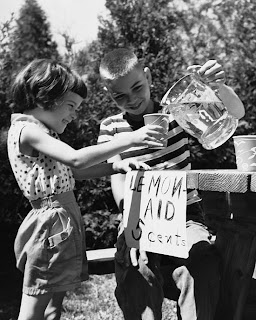 We've heard it time and time again, often during moments of significant strife- "you never know why things happen the way they do, but everything happens for a reason." It provides us with a sense of comfort after the loss of a loved one, a job, or a goal that we were not able to achieve. It gives us the mental image of a higher being in the heavens, sitting back and holding the puppet strings of our destiny, with a calm and maybe even smug demeanor, knowing that everything "will work out for the best."

I have fallen victim to this mentality myself. I reasoned, it sure would be spiffy if there was an old wise man that was busy behind the curtain working out the kinks of my future. After all, I've had many moments where I would have been happy to blame my life circumstances on someone else, and after feeling like you're not doing a very good job "behind the wheel," sometimes having someone take over doesn't seem like a bad idea.

I am willing to wager this is one of the main reasons organized religion has existed for so long. Humans share a common need to put order and meaning to chaos. When the world is uncertain, and there is the thought that tragedy could strike at any moment- the idea that there is some profound meaning is a comfort to us all. As they say in times of war, "there are no atheists in fox holes."

However, Buddhism, which is somewhat of a hybrid between a religion and a philosophy, is based on the principle of annica. The concept of annica holds that everything is changing and nothing is permanent. At first, when I learned of this philosophy, it went against my very nature. My first reaction was, "so am I just supposed to be indifferent to every tragedy that strikes?"

Case Scenario:
Friend: "My mother just died."
me: "yes that was expected, what are you doing for lunch?"

However, Buddhism warns against indifference. In fact, indifference is the very opposite of the intentional practice of awareness that Buddhism advocates. We are not supposed to just float through the world unfeeling, yet we also should not become attached to the current circumstances, as they are always changing.

There was a farmer who had a strong, hard-working horse. This horse could plough fields all day and carry heavy loads. The farmer's neighbors, who did not have such a prized animal, often said to him, "You're so lucky to have that horse."

The farmer, going about his work, simply replied, "Maybe, maybe not."

Then one day, the farmer's horse broke through the farm gates and ran away, leaving the farmer without the animal that he had come to depend on. The farmer's neighbors said to him, "Gee, you're so unlucky that your horse ran away."

The farmer, getting on with life without his horse, simply replied, "Maybe, maybe not."

A little while later, the farmer's horse came back with ten mares, all strong, fit and healthy. The farmer's neighbors gasped and said, "You're so lucky to now have 11 strong horses to work on your farm!"

The farmer, grooming his 11 horses, simply replied, "Maybe, maybe not."

The farmer's only son decided to take a ride on one of the mares. On the way home, the mare bolted and threw the farmer's only son to the ground, crushing his legs, which became infected, and later leading the son into delirium, balancing on the brink of death. When the farmer's neighbours heard this, they said, "Oh no! Your only son is dying! You are so unlucky."

The farmer, while aiding his son, simply replied, "Maybe, maybe not."

Before long, war was declared, and officials came to the village to draft the village's young men to serve in the army. Upon seeing the condition of the farmer's only son, the officials decided he could not fight, and so they did not draft him into the war. A few days later, the son's fever broke and he regained his health. The farmer's neighbors, whose sons had all been drafted into the terrible war, cried out to the farmer, "Oh, you are so lucky that your son did not have to go to war!"

The farmer, while hugging his son, simply replied, "Maybe, maybe not."

I am always comforted when I think of this story. It demonstrates how we must be the puppet string handlers of our own destiny, even when we don't feel like it. Although, it may seem as though we've lost our security blanket- when we let go of the idea of the "divine plan," we are actually evolving into a higher eschelon of thinking. A way of thinking that detaches us from destructive emotional states and frees our energy to take life by the reigns.

When I look back on the downfalls I have experienced in life so far, I can say in hindsight that I am glad they happened. If a professor from my past never called all my internship sites and ruined my chances of matching for a pre-doc residency, I would have never ended up in San Diego, having one of the best internship experiences of my life. Had my high school sweetheart never cheated on me and broke my heart, I might have never gone on to graduate school and earned my doctorate. Had my mom never been forced to take care of herself at an early age, she might not have found the reason to have a family, and this blog would have never existed, etc..

I guess what I am trying to say (in the least eloquent way possible) is that life comes at you. Life's a bitch. It throws you curve balls, and just when you think you have it all figured out, you are knocked on your knees, praying for some sort of clarity.

The very nature of the entrepreneur is that you are self-sufficient. Somewhere along the line, you have decided that you are in control. So whenever you find yourself in the midst of one of life's lemons, get up and make some lemonade, no one's gonna do it for you.
Posted by Dr. Long at 9:22 AM

Great stuff in Entrepreneur mag! And I love this post, and topic overall.

When the ish hits the fan (I'm a very rookie entrepreneur btw) - it's tough to take. All those questions run through my mind - what if I fail, how am I going to go back to a regular job, what if I'm not cut out for entrepreneurship? That's when the "divine plan" really gives me reason to look to the next day.

I know it's not the healthiest mindset, or way to cope with temporary failures. My main issue with the mindset is it almost allows you to be less than 100% diligent - because if something goes wrong, you can always say "hey all for a reason."
You're right - ultimately we have to develop more character and just make lemonade out of it.

Your thoughts on overcoming adversity hit home for me. I lost my wife three years ago to cancer at a young age and had to find a way to somehow create a new life. I guess that makes me the ultimate entrepreneur.

The ancient parable and thoughts you expressed regarding change were healing and particularly relevant to my situation. I also appreciated how you let down your guard and shared some of your own personal set backs. Its refreshing to be reminded that we are all human beings just doing the best we can.

Thank you for sharing your thoughts and making a difference.

Several months ago, after reading this article I posted a comment questioning some of the authors statements, qualifications and motivations. I find it very interesting to find that comment removed when I logged on today. I believe that people should think critically and be exposed to all view points. To remove an unflatering comment is to suggest to me that you have something to hide or were somehow threatened by it. We can all seem to be glowing wonderfully smart and insightful individuals when we surround ourselves only with our supporters.

I would repost the comment (or at least paraphrase it), but I fear that neither it, nor this comment will remain posted for very long. I would welcome a response from the author, but am relatively certain that will not happen either. Be educated consumers people.

Dr. Long
I am a entrepreneur with a doctoral degree in clinical psychology and am always looking for new ways to push the bounds of traditional psychology. This blog is intended to inspire other entrepreneurs by discussing the psychological aspects of entrepreneurship.